Spoleto was on our list of must-do destinations mostly because of the city’s historic association with the Melbourne arts scene. Many moons ago, way back in 1986 in fact, Melbourne joined Spoleto, and Charleston in the US, to stage what then became The Festival of Three Worlds. The arrangement didn’t last all that long – by 1990 the Melbourne leg of the trio had become the Melbourne International Festival of the Arts, and the other two cities reverted to their previous status as artistic twins in the Festival of Two Worlds (Due Monde in Italian). But this brief connection happened at a time when Rob was working at the Victorian State Opera; the opera company had of course participated in the festival, and so when we began planning this expedition, a stay at Spoleto during the festival was mandatory, although we did elect, perhaps unwisely, to only pick up the first week of what is in fact a three week event.

Arriving after a couple of days on the road taking in Rimini and Urbino, we dropped the car at the Hertz depot near the railway station and waited to be picked up by a driver that the owner of our apartment had organised. We were most impressed when a black Mercedes with the legend “Spoleto Festival” emblazoned on its doors swept to a halt in front of us, and our driver, a big burly bloke named Carlo climbed out to help us with our luggage. Though it turned out that he was just doing our landlady a favour, it felt like an omen. On the short drive up the hill to our apartment, we had the first of what were to be many conversations about Gian Carlo Menotti, the progenitor of the festival, and a man who has acquired semi-divine status in Spoleto (he died in 2007).

The business of finding and booking apartments in the various cities that we have visited so far has always had an element of uncertainty about it no matter how hard we work to research each place to make sure it meets our requirements; you can look at photos until you are blue in the face, and you can read and re-read the description until you can recite it in your sleep, but you are never quite sure until you arrive whether the accommodation will be a source of happiness or disappointment. In this case it was definitely the former – the apartment was much larger than the pictures had suggested, light and airy, with a full kitchen, study area, two bathrooms, plus a living room and a bedroom. Best of all, it overlooked the Piazza del Mercato, the buzzy central square of Spoleto. But wait, I hear you say, haven’t you broken your first rule of booking apartments again? Never overlook the piazza? True enough – and when I booked I thought I had that covered, since the address was clearly one street back from the piazza. Just hadn’t occurred to me that the front door might be at the back of the apartment, so to speak.

In any event, unlike Bologna, having a perch over the piazza turned out not to be a problem, since the windows were double glazed and shut out virtually all the noise at night. The square was also relatively quiet most of the time, at least until the festival got into full swing, which it definitely wasn’t when we first arrived. In fact the town was as quiet as a Mexican cantina at siesta-time, the air hot and drowsy despite our position on the top of a hill, and the streets virtually deserted. Was there really a major arts festival about to start in a couple of days’ time? A walk down the hill to the tourist office – closed, with a hand-written sign saying that the festival box office has been moved down near the Opera Theatre – further deepened our suspicion that an “arts festival” in Italy wasn’t quite the source of buzz and excitement that is usually generated in Australia.

Not that it mattered. Spoleto is a particularly pretty town, and with a population of just 38,000 (including the fairly substantial new town at the bottom of the hill) it is by far the smallest place we have stayed in so far. That made it immediately accessible; there are just a couple of piazzas, a long main street, a duomo, a new-ish theatre, and that’s about it. In between, the town is criss-crossed by narrow lanes and passageways that wend up and down the hill. There’s a big supermarket down in the new town, but unless you want to go down there every day, for most grocery needs there is a well-stocked alimentari on the Piazza del Mercato, supplemented by numerous small specialist shops selling meat and salami, while fresh fruit and vegetables can be had from several itinerant grocers who set up their stalls in the piazza each day. It probably took us about a day to explore the town, at the end of which it felt as comfortable as an old shoe.

The festival, when it arrived, didn’t so much burst into life as creep into it. There was an official launch event of sorts, but when we got there it turned out to be a panel of folk who were, presumably, the festival’s management, making a series of speeches from behind a long table to a room packed with journalists. At an event like this in Australia, the tedium of listening to self-important speeches from self-important people would at least be rewarded with something to drink and eat; not here – after the speeches were done, everyone just ambled off. And since the speeches were in Italian, we were none the wiser. But over the next few days, the presence of festival-goers and festival workers, the latter mostly youngsters identifiable by the badges dangling from lanyards around their necks, began to be more obvious.

By this stage we had been to a couple of events, and we were feeling like we were getting into the spirit of things a bit. One evening, having finished dinner, we were having an a drink in one of the cafes on the piazza, and Robert started chatting with a young artist, a native of Spoleto, whose improbable name, it later transpired, was Ob Queberry. Naturally, we nicknamed him Obi-Wan. He had been commissioned by the city council to do a number of paintings – copies of the main marketing images from previous festivals – on the surface of the piazza.

We had been a little curious about the fact that the Piazza del Mercato, instead of being paved or cobbled, was just covered in a layer of very roughly poured cement. This seemed most un-Italian, and Ob explained why. It seems that the piazza had in fact been cobbled, but a decision had been taken to pull all the cobbles up and re-lay them. However, the work had dragged on, and suddenly the authorities realised that unless they did something the piazza would just be a sea of mud when the festival was in full swing! So they decided to cover it in concrete, which will be broken up after the festival is over so that the cobbles can be re-laid. No doubt someone in the city council realised that it would look pretty drab, and so young Ob was commissioned to brighten it up.

The trouble was that the commission came a bit late – and so he was still hard at work painting his last mural the day before the festival started. That wasn’t the end of it though; we ran into him the following evening and he was standing in what we came to know as his habitual posture – paintbrush in one hand and beer in the other, cigarette dangling from bearded mouth – looking perplexed. It seemed that the council had come up with another bright idea – paint the words “Spoleto 60 Festival” right down the middle of the piazza. That sounds easy enough, until you realise that the piazza is also a traffic thoroughfare (though admittedly relatively few cars come through), there are people everywhere crossing to and fro between bars and restaurants – and there was rain about! In Italy, every problem rapidly becomes a community project, and Ob had gathered about him a gang of people, including his quite lively and somewhat madcap girlfriend (she described herself to us as being his “sex-friend”!), all of whom were ready to wield brushes to get the job done. But given the less than propitious circumstances, the work wasn’t likely to start until midnight at least. In the meantime what else was there to do except drink, smoke, and talk?

As anyone knows, this kind of scenario is irresistible to Robert. In no time at all he had declared that he was going to help out, which also meant that we had to stay the course with the partying Italians until the work could start – which it did, around 1.00 am, when most of the crowd had dispersed, and most of the rain had stopped. It was close to four in the morning when this marvellous new addition to the temporary art scene in Spoleto was completed – including a very carefully inked “t” in the word Spoleto produced by one Robert Gibbs … 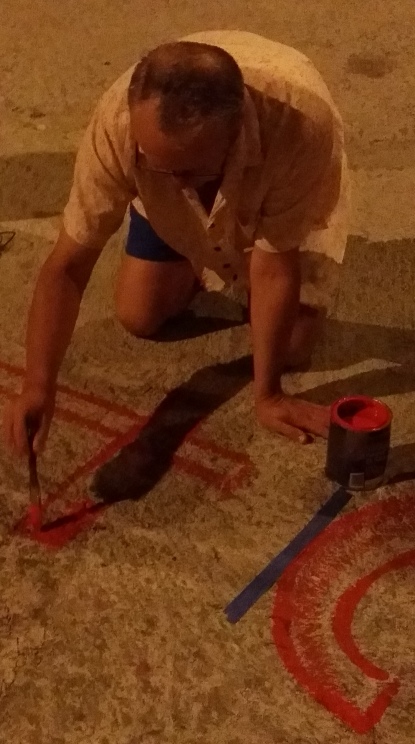 That might have been the end of the story, but there was more. A day or so later, we ran into Ob again, and he told us that the council had decided that they didn’t like the whole thing, and they had instead decided to turn it into a kind of “Red Carpet” down the middle of the street, a task he was about to commence. And so Robert’s masterpiece disappeared beneath a layer of thick red paint. Ah well, fame in the art world is fleeting.

Spoleto really is a small town, and it’s not long before you start to get to know some of the characters. We were there a week, and we met an American who had just retired there, complete with long grey ponytail, a rather morose theatre technician who told us how the festival is a shadow of its former great days when Maestro Menotti was in charge, a charming American woman who has lived there for a decade, and who had some odd conspiracy theories that she was sure would make a great book or – better yet – film, and a hyper-active young photographer, a native of Spoleto who thought his English was much better than it is, and as a consequence was harder to understand than most Italians with little English. Then there were the people who were there for the festival – an English couple who Rob literally hijacked for a drink and who turned out to be great fun, and an earnest young American singer and conductor who was spending a few days at the festival before going on to join in some musical endeavours in Arezzo.

So even without the festival, I suspect we would have loved Spoleto, because it is small, easily navigated, arrestingly beautiful, and full of strange characters. But after all we were there for the festival, and our arts friends would expect us to report on what we saw – so here it is: 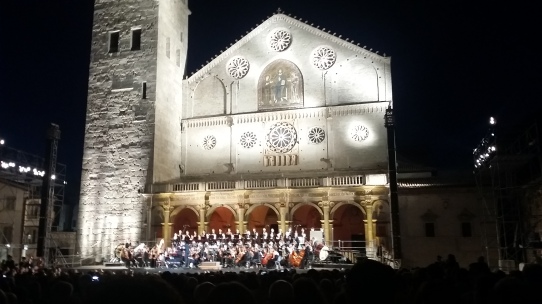 I’m sure we could have seen and done more, and possibly we could have stayed longer to see some of the works that were later in the festival (including Robert Bolle’s dance company and the closing concert conducted by Italy’s much admired Riccardo Muti). But I guess it’s a good (and optimistic) idea to leave something to come back to …

3 thoughts on “To Spoleto for a Festival”